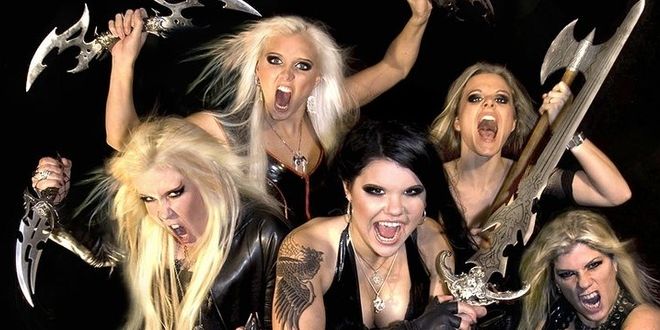 Metal, metal, metal. This word is constantly repeated in Hysterica’s universe and is seared in their music. Defined as “girls made of heavy metal” it’s clear that they are regulated by the purest genre rules. Titles like the one from their first album, “Metalwar”, mixed by the master Peter Tägtgren (Hypocrisy / Pain), or the improved successor “The Art Of Metal” speak by themselves. We contacted their drummer, Hell’n, to know more from this great metal band. 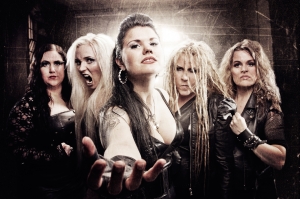 The first question is mandatory. Why to form an all-female metal band?
Bitchie is the founder of the band and she thought the world lacked an all female metalband. She wanted a bunch of girls who could play and put on a show – so here we are. I have played with guys before I joined Hysterica and the truth is that we have more fun.

Do you think that being an all-female band make it easier to get media attention or the opposite, you have to work harder to demonstrate it’s all about serious and skilled music.
It´s both. In one way we get attention because we are female. Some people come to see our shows to see if we can play and many have no expectations on what they are about to see at all. I have heard a lot of people say that they thought Hysterica would be nothing and when they heard us they got really excited and liked it. I think a femetal band also has to work harder to get approval.

Is there any all-female metal band in the world worth to be taken as a sample to follow, any of them you’d like to share the stage with (even if they disbanded)?
Personally I have always liked L7 and Girlshool. They have been a source of great influence for me. They are bands that make no excuses for themselves and seem to have fun playing.

Do the five of you share the same music taste, or there’s a mix of them that ends in your sound?
There is a mix of influences. I´m more in to classic metal while the others listens to all kinds of metal, rock and blues.

“The Art Of Metal” is a great album, and in my opinion a great step forward from “Metalwar”. Better compositions, better production, better vocals, chorus, more varied. Are you happy with the feedback so far?
Yes, we are very pleased. We had great feedback from newspapers, magazines and fans in Sweden and from other countries. Lots of people are listening to the record! Its fun to get some reward for all our work with the album. 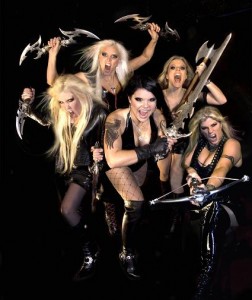 Adding the keywords, the extreme vocals, the works with visual artists …When you sat before starting the compositions, recordings, evaluating your previous effort: was there something you were sure you wanted to change, to add? Anything you were looking forward to improve?
We definitely wanted to work more with the lyrics on this album so we did. Then it was the work with the two producers who are very involved in many of the songs on the album. We wanted someone elses view to make the best of our work. We always have brainstorm madness while rehearsing, the idea of art came up like that.

You are using more extreme vocals than in ‘Metalwar’. Will it be the Hysterica trend from now on?
In Hysterica everything usually happens in the rehersal, all songs get writtern, everyone gets their voice heard. I really don’t know. We´ll see how the new songs turn out and how Annie feels about them, it will be exciting.

Is there something in your music essence that makes it unique?
I think all our different influences, different personalities, ages and so on mix into something that sounds like Hysterica.

Which are your main influences?
Whatever we have been listening to when we get down to the rehersal. It can be anything from a classic heavy metal tune to modern pop music to a psalm. Of course we all have special things we like in musik, for example I love a good guitarsolo and when suddenly Annie sounds like Rob Halford.

How important is the net for Hysterica?
Very important. That’s where people discover bands, listens to music, watch videos today. We have a lot of contact with fans on the net.

You are starting to fill the gaps in your gig schedule. Which are your touring plans?
There are touringplans but they are not official yet. Check our website for further info. 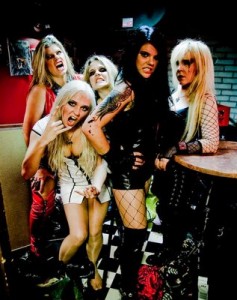 You’ve played in different European countries since 2007. Which have been the most memorable moment in your touring history?
I really liked the tour in Holland with Metalwar. We got a lot of crazy fans over there. One memorable moment was when we were stuck on the atuobahn playing our record out loud and signing records to truckdrivers, standing in the middle of the road!

Is it a must for you to play some day in America?
I would say South America. We have a lot of fans in Brazil and I think we are on our way soon! I can´t wait.

Which are your real targets, the ambitions you think you’ll achieve with your feet on the ground. An which are the goals appearing in your dreams?
Real targets are to play the big festivals in Europe, play in countries like Spain where we never been and see the world. In our dreams it’s the same vision but with packed arenas!

Good luck with ‘The Art Of Metal’, if you ever make an european tour think of Spain!
Thank you for the interview, and we would really LOVE coming to Spain and to get to know some crazy spanish people!