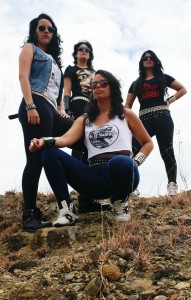 Where does Sexecution emerge from?
This band emerges from the musical affinity of four friends and their common interest in making music. Its conformed by the voice of Liseth Camacho, Paola Quitian on guitar, Patricia Prado on bass and Manuela Quintero on drums.

In the song “Sexecution” you speak of a dark world controlled by women with men as sex slaves. Why this name Sexecution?
We are very interested in the concept of the Amazons presented as warrior women in various mythologies and wanted to extrapolate this idea in our musical approach. On the other hand we found astonishing the black widow reproductive process, who after being fertilized devour the male to obtain energy for the fertilization to end successfully.

Listening to your song “The Witches Of Salem” we can get an idea of your musical paths, a powerful Heavy/Speed metal with a Thrash dose and a vibe from the eighties. Which is the style that defines your music the most?
Our style is Heavy Speed Metal

Which are your main influences?
Sentinel Beast, Flotsam and Jetsam (up to “No place for disgrace” 1988), Running Wild (to “Port Royal” 1988), Jaguar, Scorpions and other similar bands.

How comes the idea of an all-girl band and why a line-up of this style?
We personally enjoy women making music especially if they’re into metal. Bands like Rock Goddess or vocalists as Doro Pesch are directly an inspiration to us, so as a result of seeing that women in other parts of the world could do quality music, we thought of a female line-up to make our contribution to the world and the scene from Colombia.

In Colombia there are many female bands such as Coldnight , Perverse Suffering, Infernal Pussy, Highway, Fleuretty. Do you think this explosion of female bands is due to a revolution of women within a world ruled by men usually like metal?
We know the bands you list do not know their purpose and/or musical interests. Yet we know that this explosion of women’s band you name actually began years ago with other bands, with the difference that now thanks to the media the diffusion is easier. We find interesting that there are several bands formed this way in the country because it shows that women have renewed the interest for making music.

Being an all-female band will open you more doors or it will force you to demonstrate more than a male group?
Our band’s vision is not focused in competing with boy bands and we believe we are not forced to show and/or prove anything.

Which all-female bands, active or not, would you like to share the stage with?
Phantom Blue, Ice Age, Original Sin, Rock Goddess, Las Brujas.

Next step in your schedule?
Mainly rehears with commitment and dedication, making more composition to record our first demo in a near future and start live performances.

So are you willing to go on stage?
Yes, but we want to be ready to do a 100% show, and something we are sure of is that it won’t be boring.

And what can we listen in your current setlist?
We’ve written eight songs so far, two of which you named before, that are on the net.

Which are your expectations as a band? What about your dreams?
Keep on making music, enjoy the process, preserving the harmony as a band and strengthening our friendship.

Thank you for the interview, it’s your time to say whatever you want to our readers
Thanks to Metaladies and your readers for the interest in our band, we expect you to continue keeping and eye in our project because good things are coming. 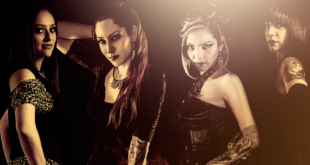