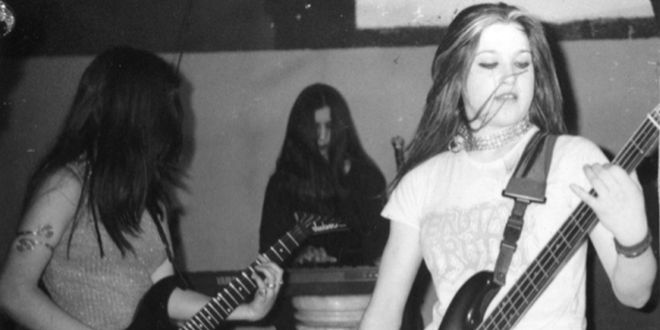 Deimos was the first all-female death metal band coming out from Turkey. They splitted in 1998, and now we remember this trio interviewing its component I??k Evirgen

Listen to Deimos while reading the interview: Just from the beginning you started touring. Did you have enough own material to complete a set list? Did you complete it with any cover?
Actually we have made 8 tracks in 6 months and 2 SFU covers. Then we started performing.

Talking about your own material, was it finally released? Is there any way nowadays we can access to your music?
No, we have never made any recordings. Our previous vocalist had full concert videos but I have never reached them since then:-) Now we have just 2 short and low quality videos in YouTube but that’s all.

As seen in some of your videos, your music was pure and raw death metals with a grind touch. Is there any more specific way to describe your music?
As I said we were a performing band and we can describe our music with 2 words: Basic and impulsive.

You sang while playing drums, and you did both so aggressively. Had you ever thought of acquiring a vocalist to fully concentrate on drumming? Or you really are enjoying making both jobs onstage.
Actually we weren’t a trio at the beginning. We had another vocalist but she had a scream vocal and we didn’t want it. I started singing while I play. It wasn’t much difficult for me. It was even fun! But of course, front man (woman: P) is very important on stage for visuality and raising the adrenaline level of the audience. I have heard some guys saying “Hey where is the vocalist!?!” I always liked the unique way of drummers doing the vocals at the same time. I think it is very cool. Deimos was an all-female trio. Was it intended to be like this since the beginning? Both aspects, all-female and three musicians?
Yeah we always wanted to be a female band. We had 4 people at the beginning. Core members (gözde, seda and me) and another vocalist. As we improved our music, we invited more musicians. But you know how difficult to work with girls is 🙂 so we went back to our former members and didn’t ask for any musicians then after. that’s why I had to be the drummer and vocalist together.

Do you thing being all-female opened you more doors than it closed?
I think yes all doors were open for us. It was easier to book concerts because everybody were wondering us. But there was one thing bad about it. If you lose a member; you can’t replace her easily because it is really hard to find another good female musician.

And what about the lyrics, what did Deimos lyrics talked about?
I was writing about existence, actually meaningless existence. The inferior existence of humankind. I was reflecting my philosophical idea.

In 1998 you parted ways. What were the reasons that lead you to split up?
Life, necessity…We hadn’t much time for music and actually my desire broken coz we lost best change for our musical future. One of major record labels wanted to us and we couldn’t go there thats why I lost my attention.

But after all, in 2000 you got together again to play five special concerts. How was it, to play together again as Deimos? And was there any intention to try to continue together as a band?
Our lives became boring without music. We needed more action 🙂 so we decided to go back to performing. It was just for fun.

However, you finally called it a quit. What happened after it? Which are the whereabouts of you three nowadays?
Everybody went their own ways. Different cities, different lives and we lost in life… Back then Ankara seemed to be a good city for the underground bands. It seems that there is a strong female underground scene in Turkey, with emerging bands like Sirannon or ?lkim Oulanem, or the old Ebonsight. Is it that strong?
I really don’t have an idea about these new generation bands. Only Ebonsight, which is pretty much an old band, had done so well back in those years. I think today’s bands have more opportunities. But again I would like to remind you that wherever there are more than 2 women, it’s going to be troublesome. 🙂

Are there any other all-female bands that you feel like was an inspiration for you? And some other you feel the Deimos spirit reflected in?
To be honest, there were not much all-female bands around, neither local nor foreign. Yes I know, there have been bands came after us and inspired by us. It always surprises me how people still know and try to contact us even though we haven’t got a single release.

And now, watching it from the distance, do you regret of any decision taken about Deimos? Would you change something from their history to keep it alive?
Yeah there are few things I would change. Especially, we had an offer from a major label which we had to put it down because of our guitarist couldn’t go abroad.

Tell the readers why Deimos was a band to take a listen.
We were a band should be experienced live rather than listened. 🙂