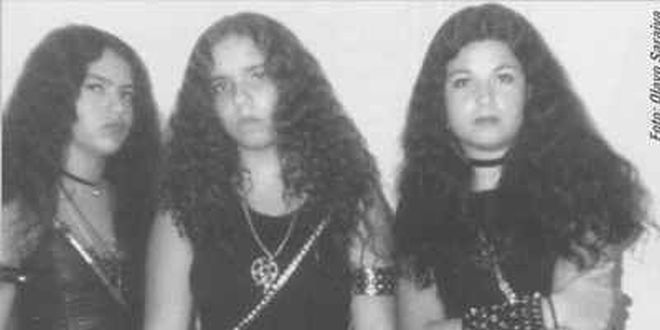 Excruciation born in 1994 as a very young quintet grind/death with a very diverse musical tastes but with a common link, the metal from bands such as Napalm Death, Slayer, Kreator, Megadeth and Metallica, not to mention Sepultura and Sarcofago coming from their homeland Biography:
Excruciation born in 1994 as a very young quintet grind/death with a very diverse musical tastes but with a common link, the metal from bands such as Napalm Death, Slayer, Kreator, Megadeth and Metallica, not to mention Sepultura and Sarcofago coming from their homeland.

The band was conceived when guitarist Juliana Rosano, since her thirteens playing the six strings, met Vanice through a mutual friend. Vanice knew a drummer, also called Juliana, and the three of them joined to form base of Excruciation.

Juliana (drums) proposed to bring Excruciation’s metal to the extreme, a decision that the trio of metalheads approved unanimously. They also agreed to use English as the lyrics language, which were contributed by all components of the newly established act. The lineup was completed by Tatiany on bass and Magda behind the mic, who answered the call from and advertisement, but to quit the band even before it had a name.

From five components to three, and then to a quartet, when Silvia came to deal with the bass and Vanice shared guitar and vocals duties. This lineup got some stability and it was when Excruciation took a more serious path. They rehearsed at Juliana Rosano’s house, without any composing patterns in some songs that were consolidated from the improvisation.

With the thrash and grind as inspiration, there were unleashed songs like “Private War”, written by Vanice, and the doom ballad “Desperate Vociferation,” both included in early demo tapes.

From the rehearsals in private homes to the studio, and from studio to the stage. After many rehearsals, the quartet offerd their thrash in their first gig. Only one day later, its founder Juliana Rosano leaves the formation in good terms, leaving it as a trio that will last for the rest of its history.

After two demos, “Excruciation” (1996) and “Noitaicurcxe” (1998), in which the band definitely opted for a Grind sound, Excruciation called it a day.

In 2012 Juliana Rosano commented to Metaladies.com that there was a remote chance for a band reunion. 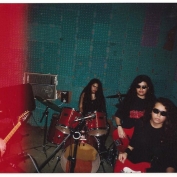 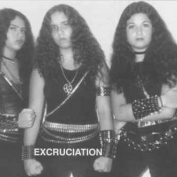